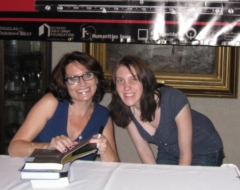 Last night, I went to see Meg Cabot – my first book signing –  and she was awesome!  She seemed really nice and down-to-earth and was actually as funny in person as she is in her books.  Perhaps even funnier, which is impressive.  We started with her giving a brief talk about her life and how she got into writing and then had a question and answer session. Then we all got to stand in line for over an hour to get our books signed.  Definitely not the most fun part of the night, but worth it! Plus it was so much fun seeing everyone from elementary school girls to women twice my age standing in line, all holding their favorite Meg Cabot books and all excited to meet her. That’s me on the right, enjoying my quick minute talking to Meg 🙂

I’ve already reviewed Abandon, the first book I got signed, so I’ll just be doing mini-reviews of the rest. And now on to the reviews…. 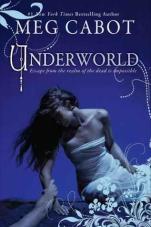 This sequel was a little slower paced than the first book, mostly because the first book ended with John bringing Pierce to the Underworld for her protection. So a lot of the beginning of this book was just the two of them in the Underworld, working out a rather angsty relationship. A few of the problems in Abandon first jumped out at me when I got to this part of the series, because they’re magnified here by the lack of action. However, John’s back story is also slowly revealed throughout the book and there are new dangers threatening Pierce’s family, which kept me turning the pages and excited to find out what happened next.

With all of Meg’s books, I’m having trouble conveying the good things, because basically they’re just enjoyable. They’re light, fun reads and while they have plot problems that might bother some people (at some times, might even bother me), I enjoyed reading them immensely for what they are – nothing to be taken too seriously, but still fun, well-written YA stories.

What impressed me most about these two books, was that the heroine had a distinct voice, different from that of Pierce in the Abandon series. She’s a little more of a tom boy and just seems to have a different outlook on life than Pierce. Both narrate in such a way that I felt like I got to know them though, and I think that’s one of Meg Cabot’s greatest strengths. This book didn’t have some of the problems of the Abandon series, especially missing the angsty teen romance. Sure, Suze is concerned with whether or not guys like her and a little too easily won over by a guy being hot and interested in her, but we don’t dwell on the romance as much and I found the romance that was there a little more believable. As a result, I think this was my favorite of the two series and I’m excited to read the rest 🙂

One response to “Meg Cabot – Book Signing Scoop and Mini-Reviews”